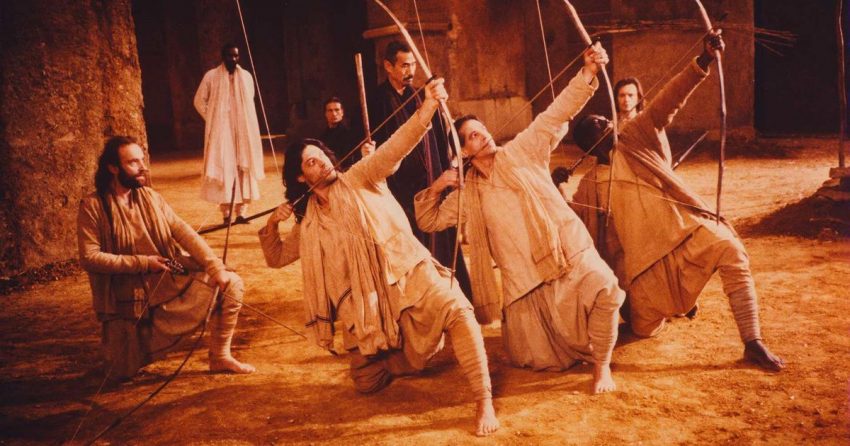 Peter Brook’s original 1985 stage play “The Mahabharata” was 9 hours long, and toured around the world for four years. In 1989, it was reduced to under 6 hours for television.
The Mahabharata is one of the two major Sanskrit epics of ancient India, the other being the Ramayana. Traditionally, the authorship of the Mahabharata is attributed to Vyasa. Without being directly related to them, the Mahabharata derives many of its philosophical concepts from the Vedas.
The Mahabharata tells of Prince Arjuna and his four brothers Yudhishthira, Bhima and the twins Nakula and Sahadeva, all married to the same woman, Draupadi. They are known as the Pandavas, the sons of Pandu, who was king of Hastinapur in North India and himself the son of Ambalika and Vyasa. After the death of their father, the Pandavas grow up at the court of their uncle, the blind King Dhritarashtra, who has become the new ruler.
There is always great rivalry between the Pandavas and the Kauravas, the one hundred sons of Dhritarashtra. Eventually the old king gives his nephews some land of their own but his eldest son, Duryodhana is jealous of their success. He challenges Yudhisthira, the eldest Pandava, to a game of dice in which he loses everything. The Pandavas are then forced to surrender their land and go into exile for thirteen years.
On their return, the old king is unable to persuade his son Duryodhana to restore their heritage, and in spite of efforts at reconciliation by Sanjaya, Dhritarashtra’s charioteer; by Bheeshma, his wise counselor; and even by Lord Krishna himself, war cannot be averted. The rival hosts face each other on the field of Kurukshetra.
When Prince Arjuna surveys the battlefield, he is overwhelmed with sorrow at the futility of war and it is at this point that the “Bhagavad Gita,” or “Song of the Lord,” begins (click here for an extensive analysis). The teachings of the Bhagavad Gita are spoken by the divine Lord Krishna, who is acting as the prince’s charioteer. They are overheard by Sanjaya and reported back to King Dhritarashtra.
When Krishna has finished speaking to Arjuna, the two armies engage. The battle lasts eighteen days and by the end of it nearly all of the warriors on both sides are dead save Krishna and the five Pandavas.
Running Time: 5:24:56
Note: The entire text above is that of the original YouTube publisher (Space And Intelligence), only modified by the insertion of additional links.

The Internet Sacred Text Library | The largest freely available archive of online books about religion, mythology, folklore and the esoteric on the Internet. The site is dedicated to religious tolerance and scholarship, and has the largest readership of any similar site on the web.