Separate Tables, Terence Rattigan’s famous play from 1954, consists of two linked one-act plays set in the Beauregard Private Hotel, a run-down hotel in Bournemouth, England. In one, a divorcee tracks down her former husband in order to resume a kind of half-life with him. In the other, a repressed young spinster offers moral support to a fake major accused of importuning women in a local cinema. Rattigan wrote an alternative version in which it is revealed the major was a homosexual thus insinuating the major was pursuing illicit sex not with women but with other males in that local Bournemouth cinema.

Separate Tables premiered in 1954 at the St James’s Theatre in London on 22 September. Directed by Peter Glenville and starring Margaret Leighton and Eric Portman in the leading roles, it received rave reviews; critics unanimously hailing the play as ‘a triumph’. The production was later taken to Broadway. 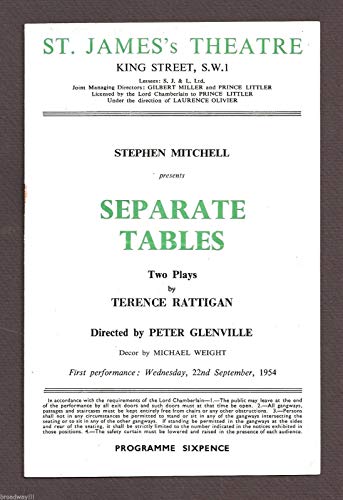 Here is the third film version, John Schlesinger’s television production made in 1983. Great performances from a stunning all-star cast.

A troubled homosexual, Rattigan viewed himself as an outsider. His plays centred largely on issues of failed relationships, sexual frustration, and a world of repression and reticence.