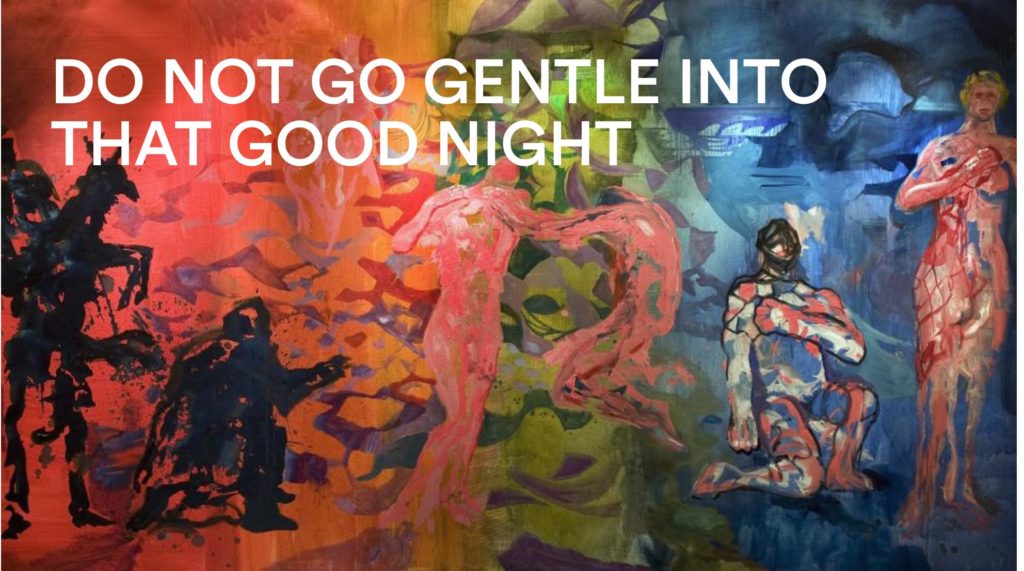 Dylan Thomas’ famous poem was written during a visit to Florence, Italy, in 1947. It was published four years later, in 1951, only two years before Dylan Thomas himself died at the age of 39. The poem is written as a villanelle (nineteen lines, divided into five tercets every other line rhyming, and a concluding quatrain at the end).

The poem is usually interpreted as having been written by Dylan Thomas about his father’s death. However, this attribution appears to be a fallacy as the father died four years after the poem in fact was written. Robert J Gibson, a New York intellectual, who had arranged several readings with Dylan Thomas at the Roerich Museum in NYC, revealed in the late 80s that during a conversation Thomas had shared the poem was in fact written about his father’s rapidly declining eyesight and approaching blindness – ”Rage, rage against the dying of the light.” However, Thomas had repeated several times, ”Let people make of it as they please.”

Taking care of my 91 year old mother, I’m being deeply affected by her gradual withdrawal from people and the world around her, as well as her waning memory. I miss her contact and engagement, and I often rage against the dying of her light – I want and long for her to rage. Hence the poem has a profound appeal and effect on me.

Now it’s your turn. Make of it as you please:

Dylan Thomas | DO NOT GO GENTLE INTO THAT GOOD NIGHT

Do not go gentle into that good night,
Old age should burn and rave at close of day;
Rage, rage against the dying of the light.

Though wise men at their end know dark is right,
Because their words had forked no lightning they
Do not go gentle into that good night.

Good men, the last wave by, crying how bright
Their frail deeds might have danced in a green bay,
Rage, rage against the dying of the light.

Wild men who caught and sang the sun in flight,
And learn, too late, they grieved it on its way,
Do not go gentle into that good night.

Grave men, near death, who see with blinding sight
Blind eyes could blaze like meteors and be gay,
Rage, rage against the dying of the light.

And you, my father, there on the sad height,
Curse, bless, me now with your fierce tears, I pray.
Do not go gentle into that good night.
Rage, rage against the dying of the light.

The illustration at the top of this posting is by Norwegian artist Håkon Bleken who was inspired by Dylan Thomas poem, subsequently producing a series of painitngs of which the above is no. 6.
Håkon Bleken: Do Not Go Gentle VI (2008)
From the Britannia Hotel Collection. Photo: Egil Rein